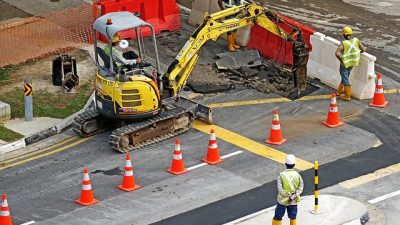 Distracted driving and failing to yield are causing a surge in preventable roadside injuries and fatalities for first responders, department of transportation workers, and others who find themselves working on the side of the road. Illinois is taking proactive steps to protect roadside workers. The Move Over Task Force, which is composed of representatives from state agencies, the legislature, and the governor’s office, is looking for solutions to keep roadside workers safe. However, roadside dangers are still present and workers who operate in these environments must remain vigilant to protect themselves and their colleagues.

The primary dangers to roadside workers are distracted or inattentive driving. A car going 60 miles per hour travels approximately 88 feet per second. Put in perspective, in two seconds, a car can travel the length of a 16-story building. It only takes a few seconds of inattention, such as looking down at a text message or looking for a dropped item, for a moving car to slam into an object on the side of the road.

The rates of these accidents are also increasing. According to CBS Local, ten Illinois State Police troopers were struck by drivers in a two month period at the beginning of 2019. Only a few weeks ago, a state trooper lost his life when he was hit by a car.

The Move Over Law

The primary law to prevent these accidents is the Move Over or Scott’s Law. Scott’s Law is named after Scott Gillen, a firefighter who was killed by a drunk driver while he was working on the sire of the road. The Move Over Law requires all drivers to slow down and move over as they get closer to a car on the side of the road with lights flashing.

Drivers who are found in violation of the Move Over Law can be fined up to $10,000. Moreover, if the driver is found to have alcohol or drugs in his or her system, the Move Over Law can also result in aggravating penalties (which increases in the punishment on the offender). For example, drivers could lose their license for 90 days or even face jail time for up to two years if someone is injured or killed – in addition to other punishments.